📍How to get to Queen’s University

Queen’s University is located in the south of the city, about 20 minutes walk from Belfast City Hall.

You can get there on foot, or you can choose to go by bus. From Donegal Square there are two bus routes that drop you off right outside the university: 8b and 8d.

I recommend you to take a look at this article about how to get around Belfast, maybe it will help you to better organise your trip.

Queen’s University is one of the most emblematic places in the city. Its main building is known as the Lanyon Building, after Charles Lanyon.

Lanyon took inspiration for the design of this building from Magdalen College, Oxford. Its impressive façade is in the Tudor style, with red brick and honey-coloured sandstone.

However, Queen’s University was not the only college under this name. To provide a non-denominational alternative to the Anglican Trinity College Dublin, three Queen’s Colleges were established: in Belfast, Cork and Galway.

Today, although all are still in operation, only the one in Belfast retains the name Queen’s.

In these pages you can find all the information about the opening times of:

🏢 Buildings and rooms you can visit in Queen’s University 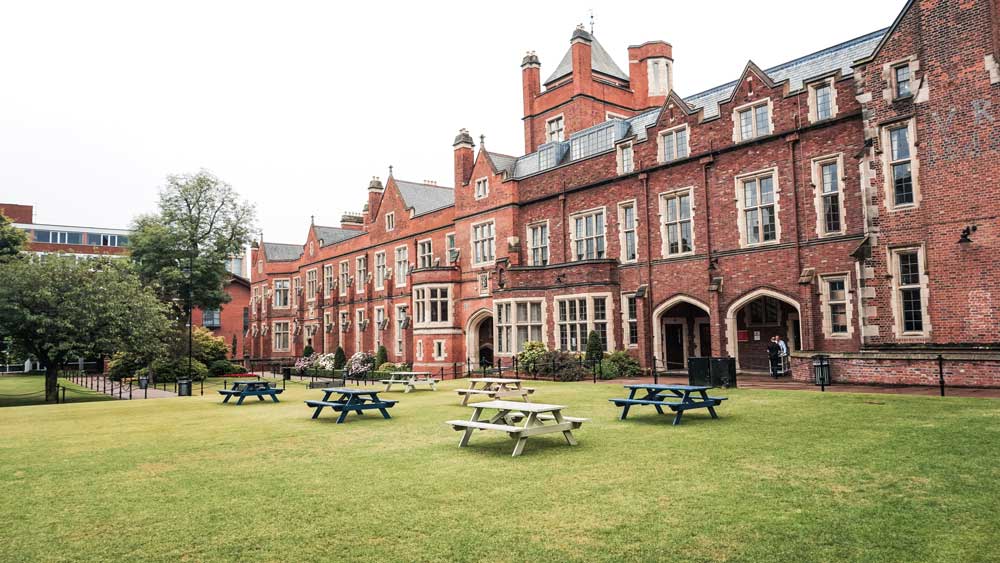 This is the main building of the university. And as I mentioned earlier, one of the icons of the city of Belfast.

Just before entering the main building, we find the War Memorial, a monument that was built as a tribute to the men and women who died during the two World Wars. The War Memorial depicts a winged Victory cradling a dying soldier. It was designed by Sir Thomas Brock and executed by F. Arnold in 1923. 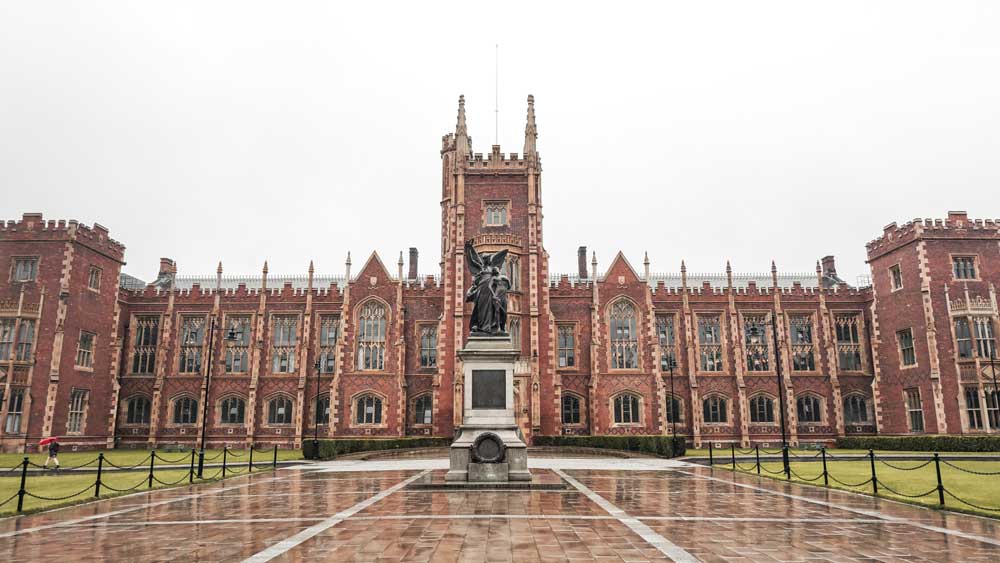 An imposing statue in the middle of White and Black Hall welcomes us. It is a statue of Galileo sculpted by Pio Fedi.

You know the story of Galileo, don’t you? Galileo discovered that the earth revolves around the sun, for which he was persecuted by the Inquisition and forced to recant and remain in prison.

A professor of a medical subject, Sir William Whitla, donated the statue to the University.

Above the statue is this memorial window, designed by J.E. Nutggens in 1939. In it we can see various symbols of Queen’s College, Queen’s University, the city of Belfast itself and Derry.

If you visit the University, don’t forget to look at the mosaic. This is the coat of arms of Queen’s College, and there are only two mosaics in the whole University! The other is at the entrance to the School of Music, the former Student’s Union. 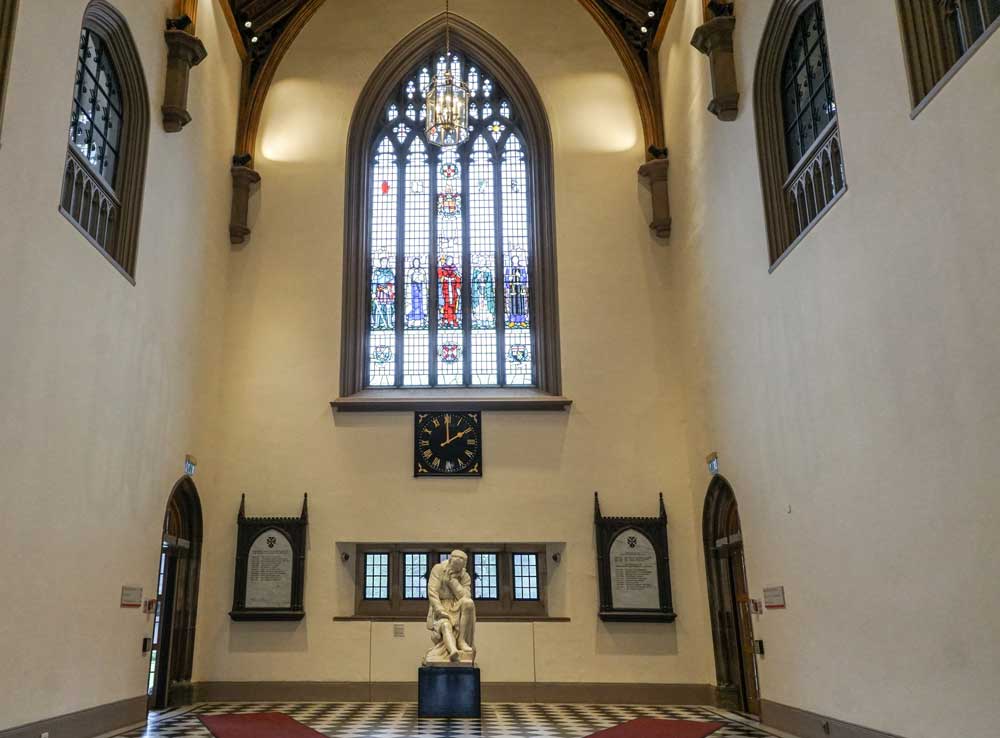 The Welcome Centre is a tourist information office for Northern Ireland. As well as being an information point for visitors and tourists, it is also a souvenir shop. 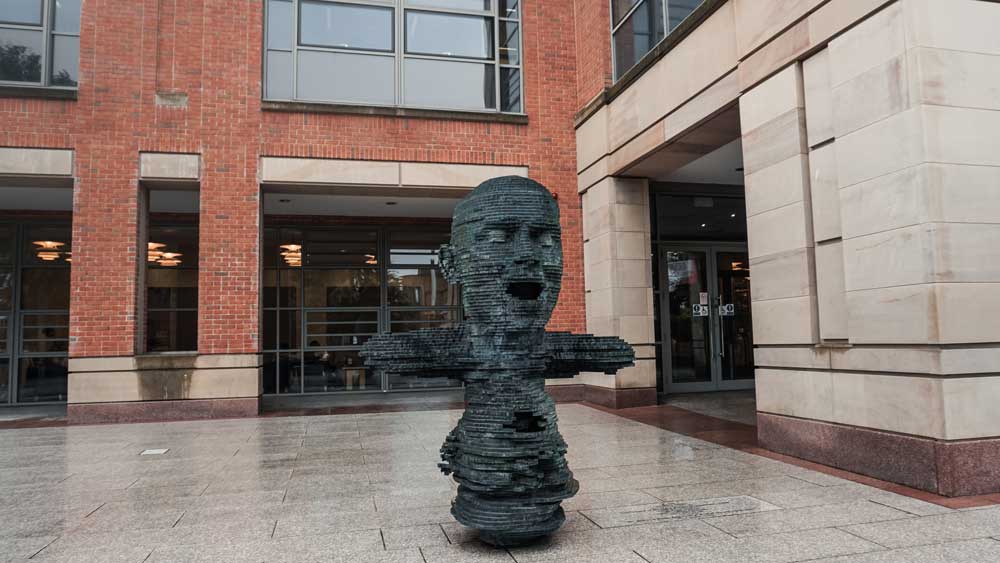 In the past this room was used as a Zoology Museum and offices before being redesigned by architect Robert McKinstru.

As a sign of the good relations between Queen’s University and the provincial governments of Canada, the room was renamed the Canada Room. Hence the choice of red as the main colour and details featuring the Canadian maple leaf. 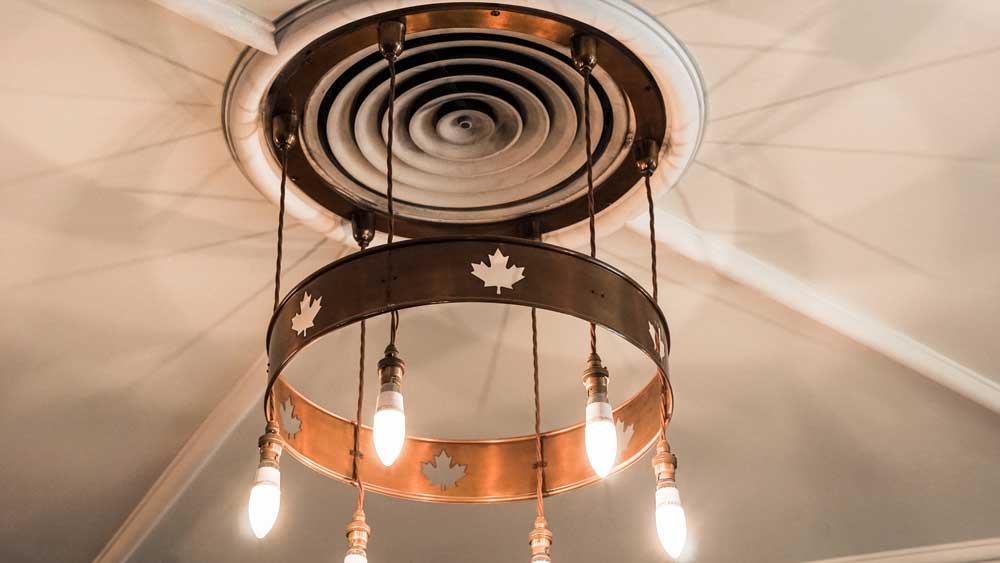 This is a former reading room. Inside, Women Emerging from the Shadows, a work by the award-winning Newry Michelle Rogers, stands out. The painting was commissioned by the Queen’s Gender Initiative to commemorate the contribution of women to the life of the university. 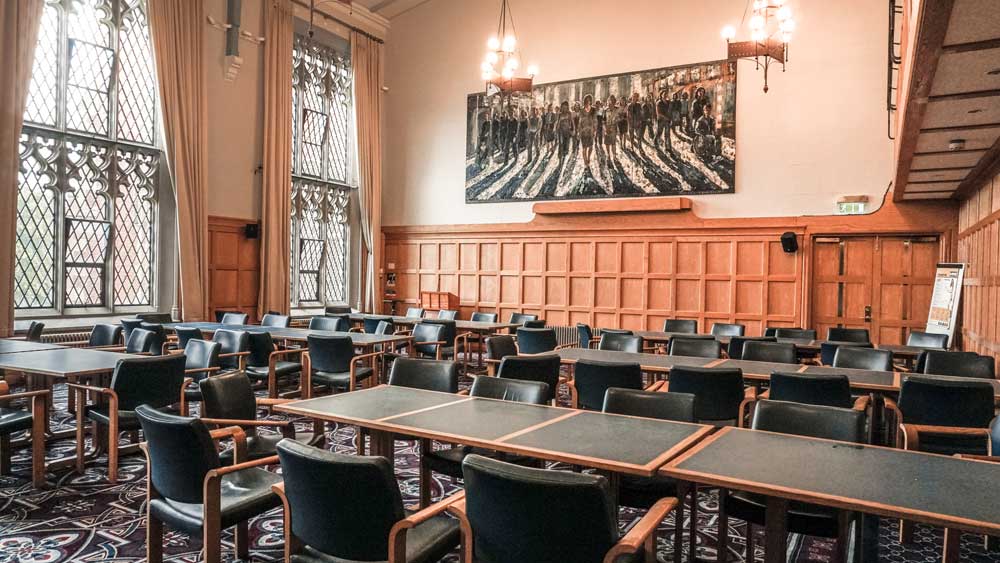 One of Belfast’s most dynamic galleries. It is characterised by its contemporary exhibitions.

The day I visited the University there was an exhibition called Best Before, by Stephen Johnson. It was focused on his hyper-realistic painting, where he depicted glass jars containing different types of food such as fruits, fish and even Maltesers. 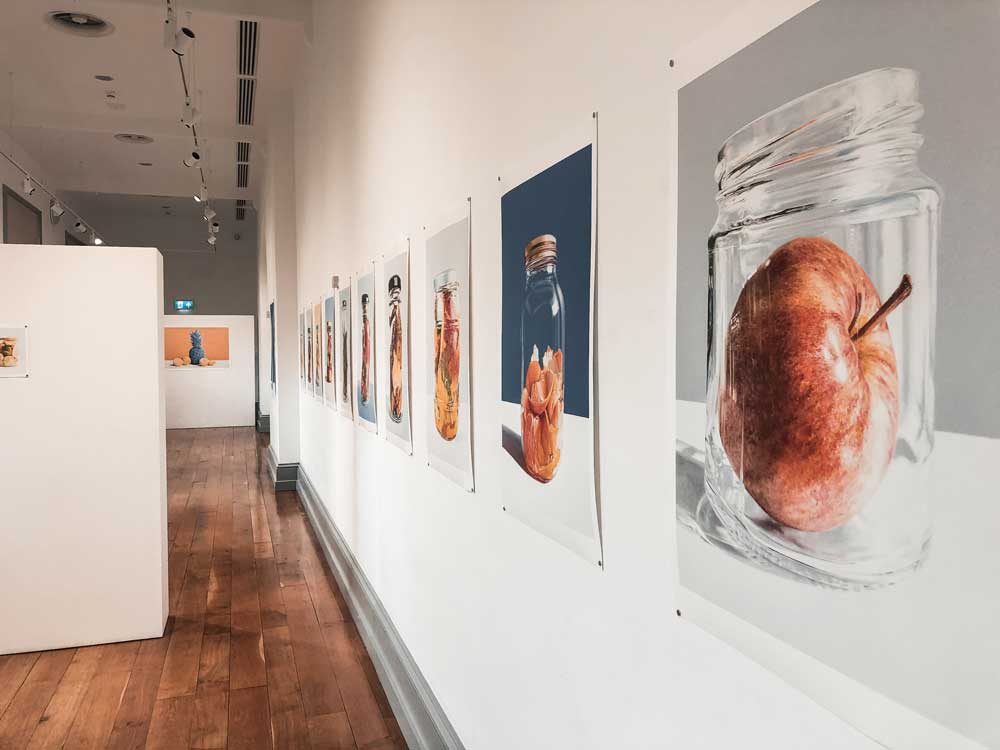 It was the University Library until 1868, and now hosts lectures, exhibitions and events – like the day I went.

A copy of Titian’s The Death of St Peter Martyr by James Atkinds presides over the room. On the right, the portrait of Queen’s Victoria, the founder of Queen’s College. Some of the faces whose portraits are in the room include Nobel Laureate Seamus Heany, and the former President of Ireland, Mary McAleese. 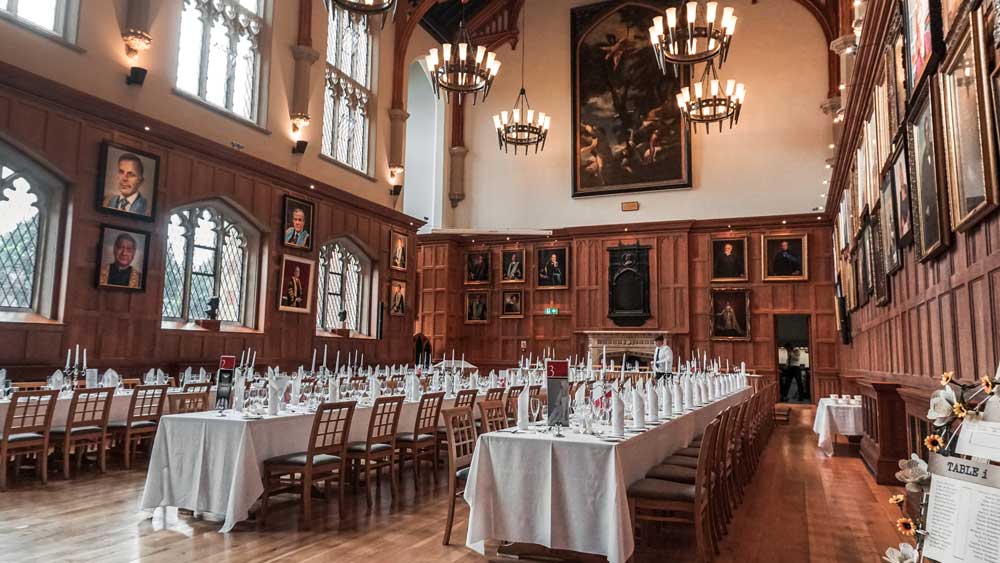 It has been declared one of the best university libraries in the world, with more than 1.5 million books and 2,000 places to read.

The library was opened in 2009 and is named after Sir Allen McClay, one of the university’s main benefactors.

But its best-kept secret is that it has an exact replica of the wardrobe used in the Narnia film.

Its writer, CS Lewis, was born in Belfast. Hence, both the city and Queen’s University wanted to pay a small tribute to him. CS Lewis Square in the eastern part of the city, and CS Lewis Room in the university itself.

To access the CS Lewis Room you have to go through the Narnia wardrobe. The floor simulates snow, on the table there is a map of Narnia and surroundings. In addition, the room is decorated with different books by the writer in glass cabinets and phrases from them on the walls. 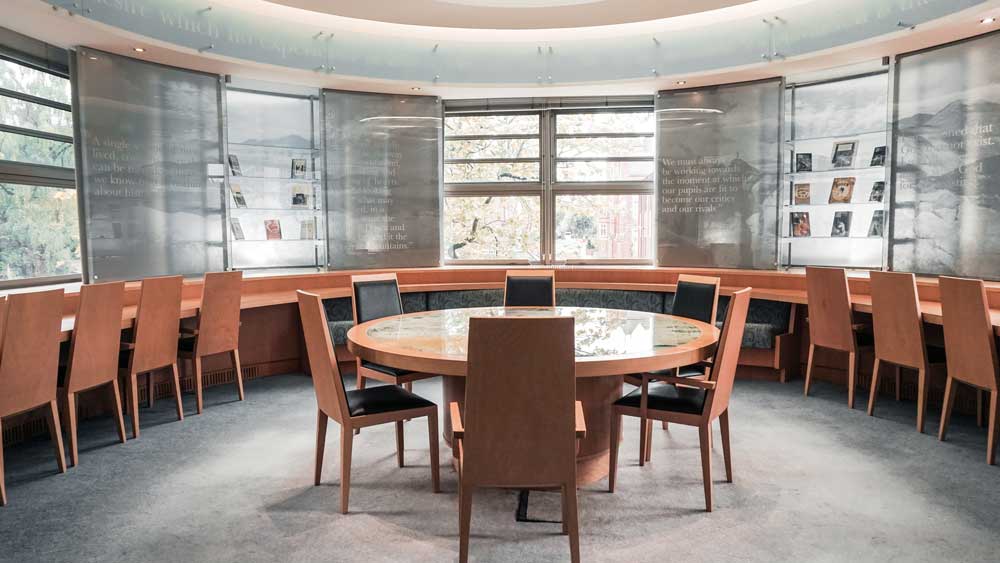 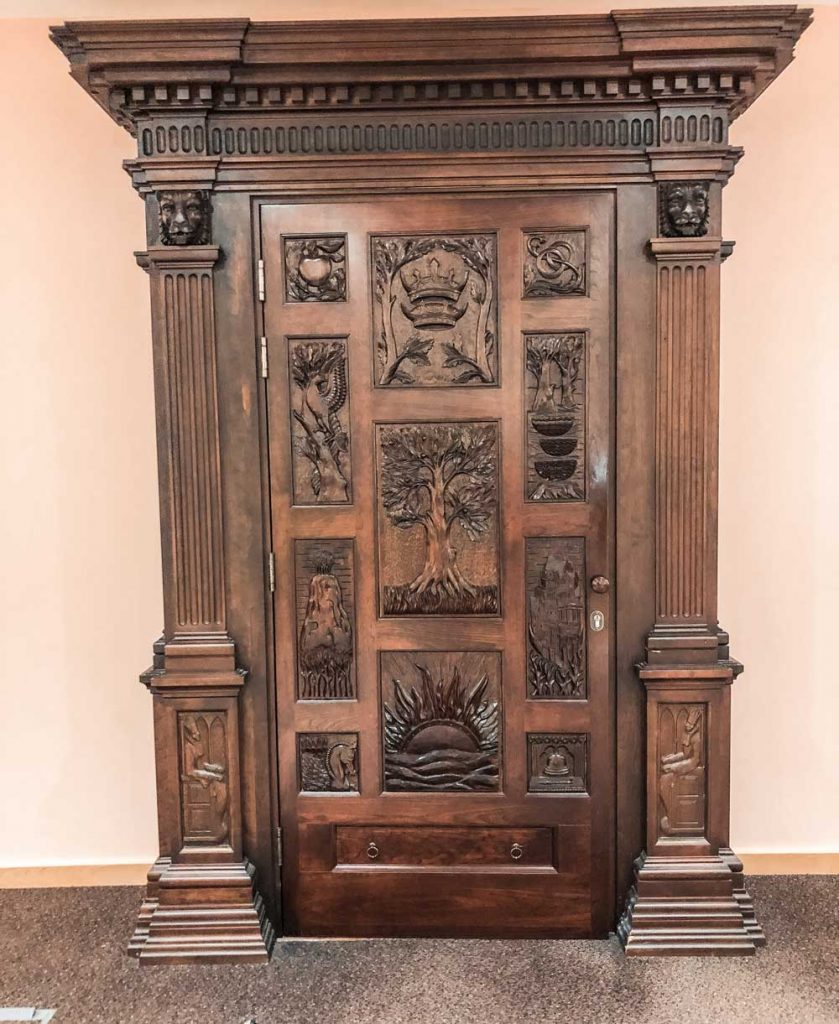 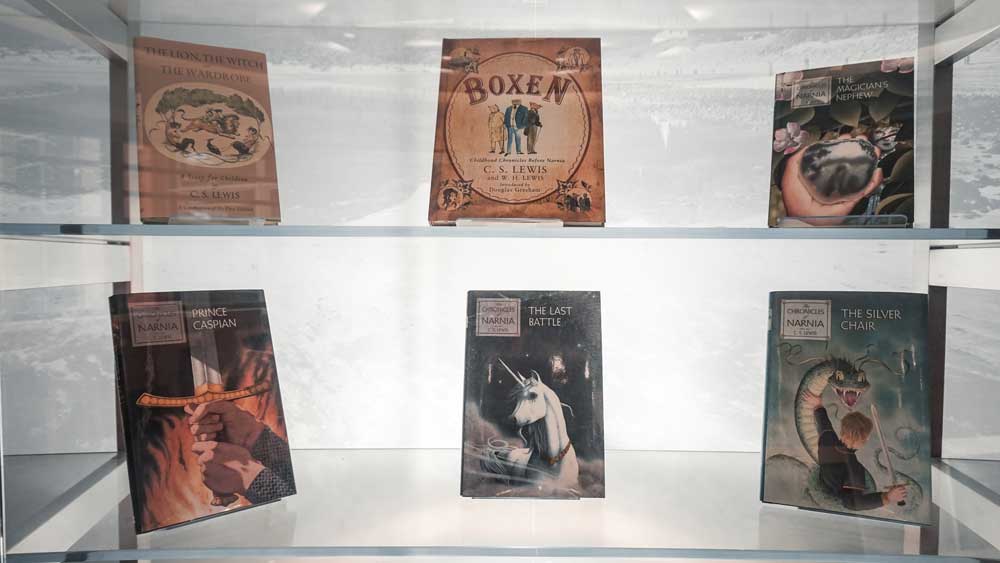 📣 Places to visit near Queen’s University

The Ulster Museum is one of the best places to visit in Belfast.

It is the largest museum in Northern Ireland. It has a variety of exhibits, some of which tell the story of Northern Ireland’s history. Among them, there are even dinosaur skeletons and mummies.

Just a short walk from McClay Library is this beautiful botanic garden.

Originally a private garden, it is now open to the public and is a great place to stroll around. Botanic Gardens has two greenhouses: Palm House and Tropical Ravine House.

After you’ve explored the university thoroughly, a good stop to recharge your batteries might be Maggie’s May. They serve Ulster Fry, one of Northern Ireland’s most typical dishes, almost all day long. And reviews say it’s one of the best in town. 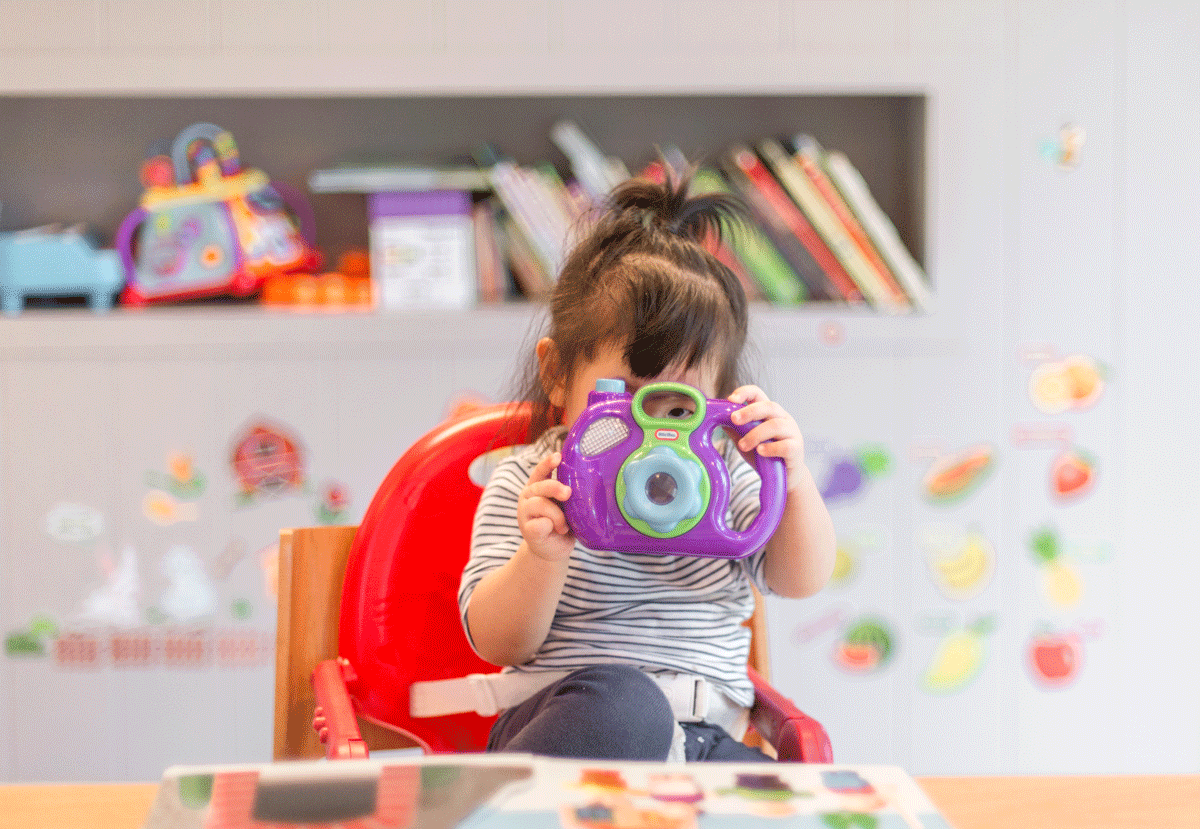 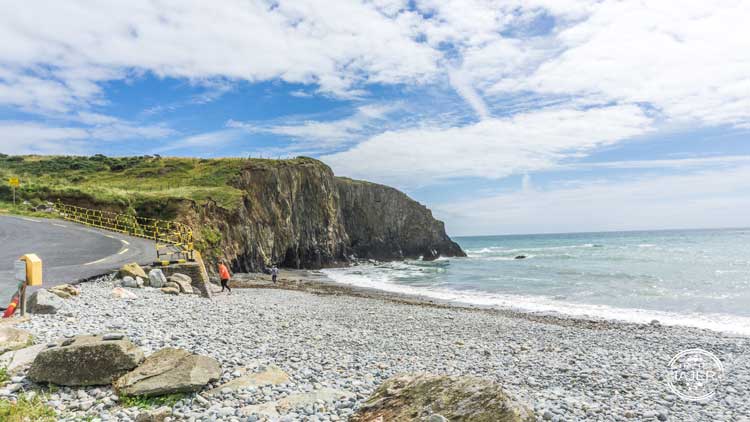 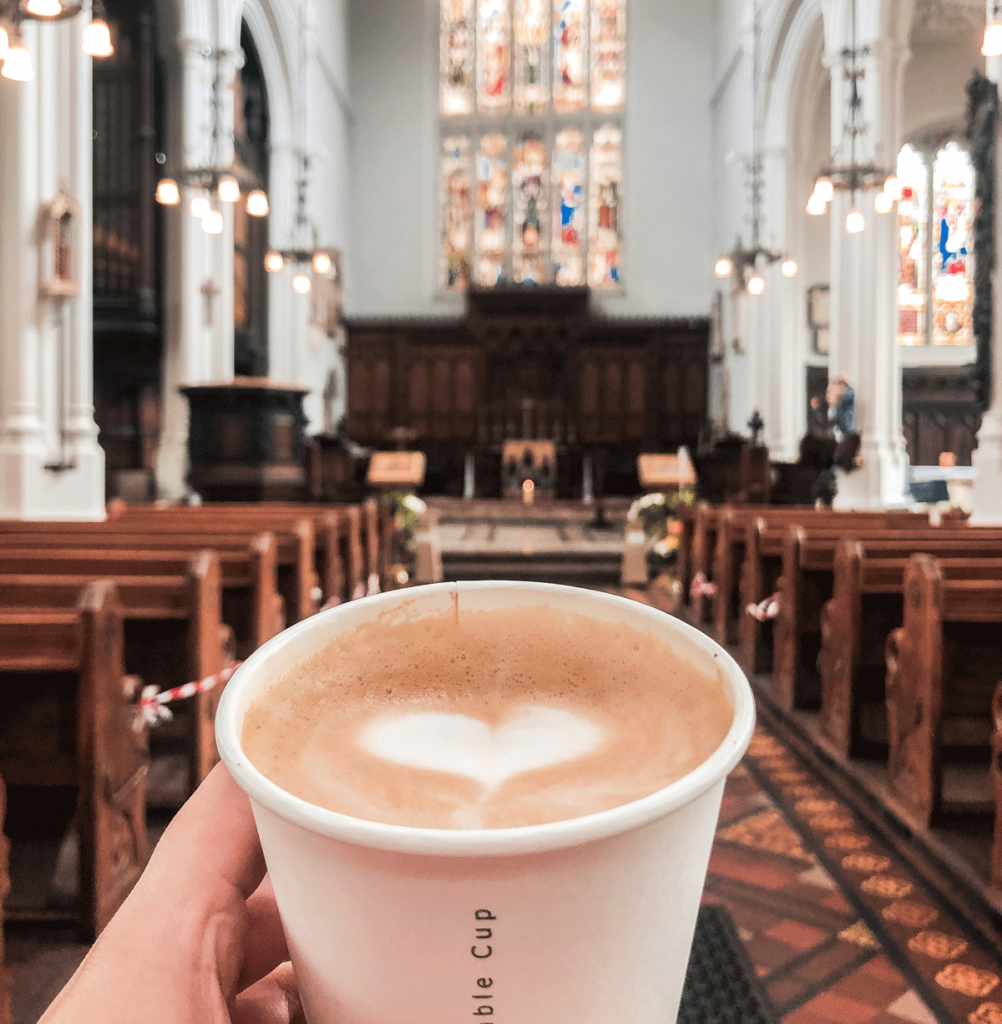 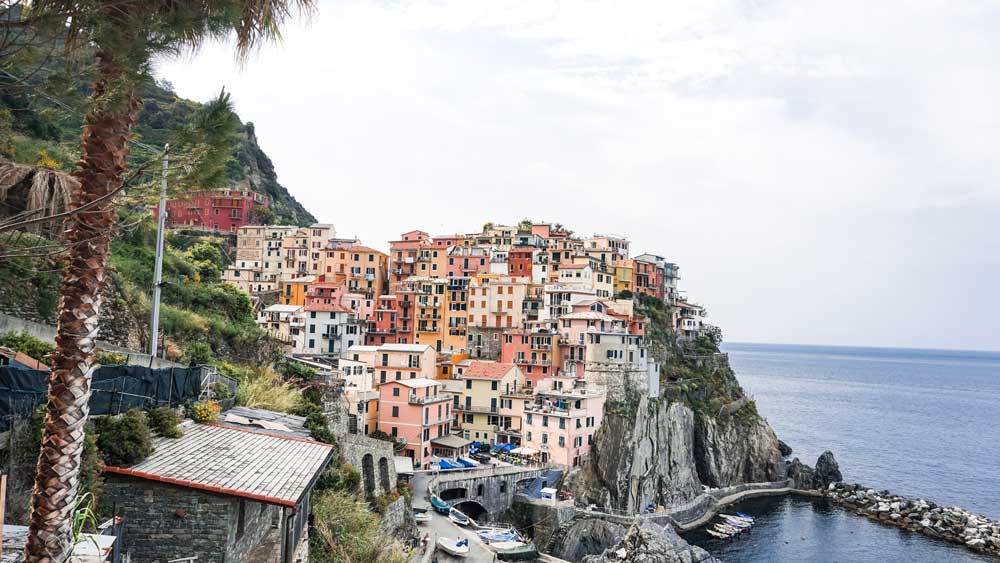 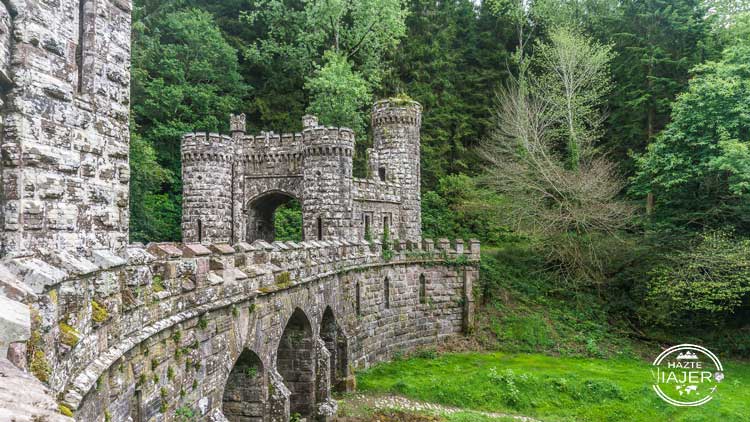 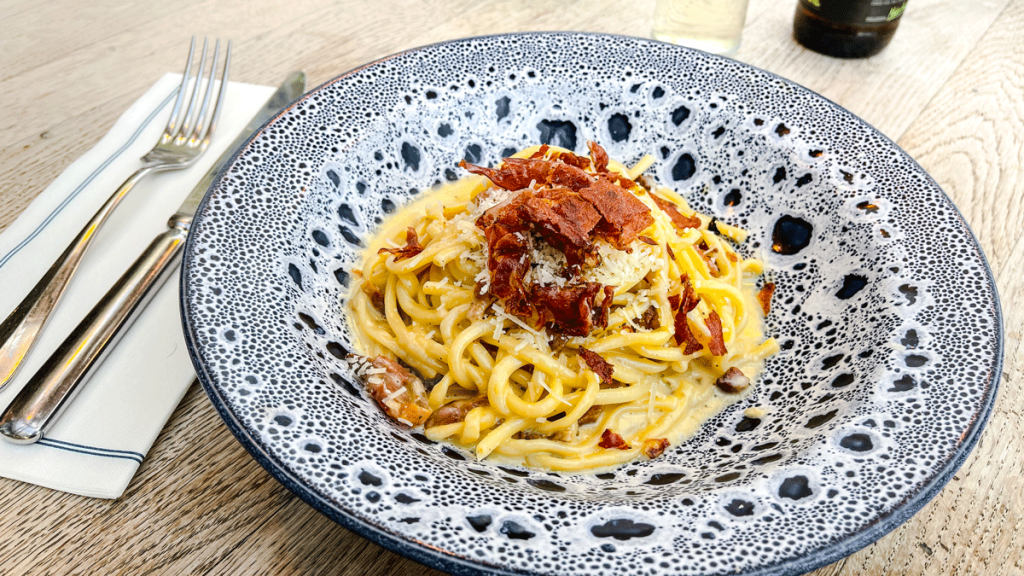